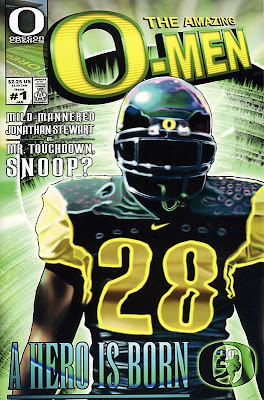 With all the talk this year of coaches using web cam technology to gain an edge on other programs in recruiting, this college football guy says who needs expensive, new "fan'gled" technology when cheap art students will work.

The University of Oregon has been making comic books for potential recruits since 2005. We have to say this is pretty genius. Unfortunately there is nothing in this super hero story about overcoming a toe injury and losing your starting QB to a torn ACL while ranked #2 in the country. You can't predict everything. SNOOP! SNOOP! SNOOP!

Yeah Saban! An elephant would make an excellent Robin to your Batman.
Posted by College Football Guys at 3:18 PM No comments:

Well it is official. Duke Sucks!

Many people have felt this way for years, including more than half the state of North Carolina and any fans of basketball programs that have lost to the juggernaut that is Duke. However now these folks are in good company. A judge last week agreed with Duke's lawyers that they do suck and thus allowed the Blue Devils to back out on a three game series they had scheduled with Louisville. The judge ruled that any replacement would do and therefore the Duke is not liable for the $450,000 that Louisville was trying to extract for the cancellation.

It is this college football guy's opinion that Louisville already knew this and would rather have had them on the schedule than mighty App. State.
Posted by College Football Guys at 3:10 PM 1 comment:

As I sit here enjoying the CWS Finals between UGA and FSU, I can’t help but feel anger and aggravation at the NCAA. Fresno is the lowest seeded team to ever reach a national championship game (in this case a final series) in any NCAA sport. Period. EVER. That being said, hardly anyone in the country knows about it or has even watched the unranked Bulldogs play. We have to watch NCAA basketball on CBS for a month, which is fine, and their Final 4 championship weekend . NCAA football is a different animal and we all know we can’t get enough of BCS bowl games every year on FOX. NCAA baseball is the 3rd most popular sport I would think as far as television viewership and we can’t even watch this history making CWS finals and Fresno State team on 1 of the 4 major networks. ESPN at the very least could’ve promoted the heck out of this CWS finals series and moved it to ABC this week.

Fresno had to win their conference tourney, win the regionals as a 4 seed, win the super regional and then have come to Omaha and competed their tails off. This team’s best pitcher is at home with an injury; they are getting homeruns from guys missing tendons in their hands; and somehow they have a legitimate chance to win a National Championship. It is an absolute shame the country as a whole is not watching what is happening in Omaha. Fresno State could be the lowest ranked team to ever win a national championship and I hope people will remember what this team accomplished this year win or lose because they have competed their hearts out and deserve to at least be watched by sports fans everywhere. Win or Lose, Disney better be preparing to make a movie!!!!
Posted by ethanbush33 at 10:34 PM 2 comments:

Rest In Peace My Friend!

Well we are a blog about college football, so we are going to be uncreative and post this clip up. Rest In Peace George! We will miss you! Come on football season!

Posted by College Football Guys at 6:52 PM No comments:

A couple weeks ago our blog had an entry on the definition of "Cougin' It". It didn't take to long for an ol' WAZZU Coug' to give us another example. Last week Cougar Xavier Hicks was pulled over on his way home from jail! He was serving a 45 day sentence for stealing a debit card and putting rubbing alcohol in his roommate's contact-lens.

Driving home from jail. Get pulled over a couple blocks from home and cited for driving on a suspended license. "Coug'd It."
Posted by College Football Guys at 5:42 PM 2 comments:

NBC Bets on a Greener Future

NBC announced this week that they are renewing their TV contract with Notre Dame football to continue coverage through the 2015 season.

Once again the college football guys decided to hop in our stainless steel Delorean and take a trip back to another time and place involving NBC and another awful brand of football, the Tommy Maddox dominated XFL. Lets do a little bit of quote comparison here and see if any of this looks similar.

''In Vince McMahon, we believe we're getting the best promoter to that audience,'' Dick Ebersol, the chairman of NBC Sports. (3/30/00)

"We're big believers in how Notre Dame time and time again over all these generations has maintained its strength," Ebersol said. "I don't see that going away." (6/19/08)

"NBC is excited about the investment in WWF Entertainment," said Bob Wright, president and chief executive of NBC. "The WWF is widely recognized as having created a leading brand and has done a remarkable job gathering large audiences in the coveted male demographics." (3/30/00)

"I have no doubt that over the majority of years going forward this will be a sensational deal for both sides," Ebersol said. (6/19/08)

"We just feel it's very disruptive for our students, for the academic life at the university to have a game at (Saturday) night," Rev. John Jenkins, Notre Dame's president said. "NBC has always been accommodating to us on that even though their viewership increases as the game gets later." (6/19/08)

This last quote is the best. The new TV deal includes 7 home games a year and 8 off site home games. Your right Rev. Jenkins. Home night games would be WAY too disruptive. Even more so than "home" road trips to San Antonio, Orlando and Dallas!
Posted by College Football Guys at 1:14 AM 2 comments: 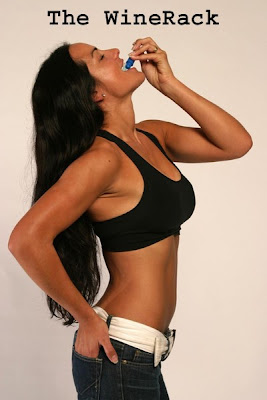 Boobs filled with alcohol!?! Every man's dream just became a reality with the invention of the "Wine Rack." The people at Cooler Fun who brought us the "Cooler Wagon" have given us the greatest tailgate gift EVER! Who needs a flask when you can hide your alcohol in your girlfriend's breasts? Not only is it functional, but it also "lifts and separates." Now we know why TSA agents were busted for running their hands along women's bras. They were simply looking for that over 3 oz. container of liquid you were trying to smuggle past security! 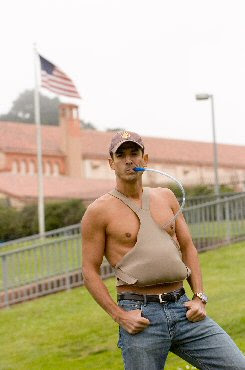 Just in case you don't have a woman in your life, or one that is willing to give up her safely padded miracle bra for yours - full of beer, Cooler Fun wants to make sure you are still taken care of with the "Beer Belly." I can't think of an easier way to fool that GED striving, security guard at a college football game near you. This is sure to provide hours of enjoyment. Warning: If used more than once you will NOT look like the guy in this pic. Oh who am I kidding you don't look like him now.

Thanks to http://www.sioncampus.com/ for the heads up on these magnificent creations!
Posted by College Football Guys at 12:36 AM No comments:

Updated 6/20/08: Readers are coming in with more entries for ASU. Enjoy and nice work out there! 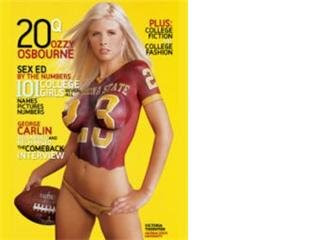 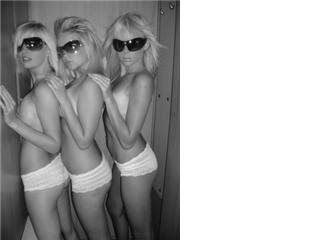 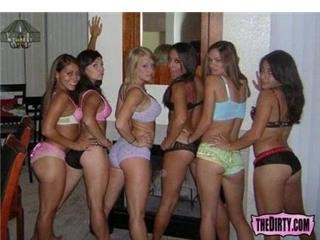 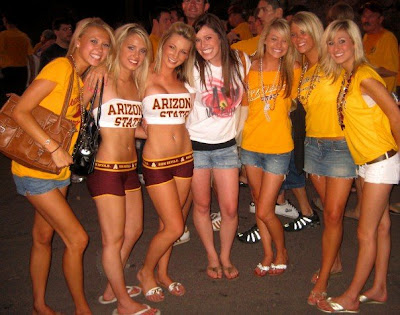 Posted by College Football Guys at 5:51 PM No comments:

Do you have something to add to help the readers decide? Post the pic or link in the comments section! Who has the best looking girls? 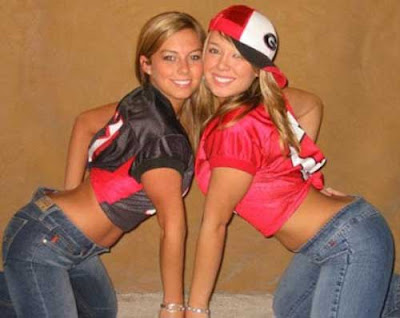 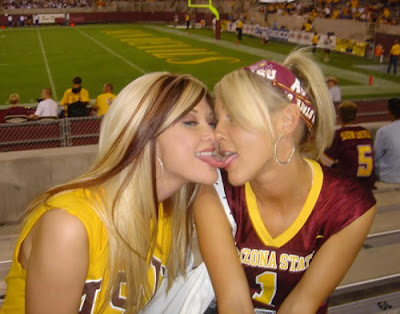 Posted by College Football Guys at 2:09 AM No comments:

All the preseason mags are out. All the pundits are starting to assess the season to see who is going to win this year in college football. We thought we would bring the argument to the people by helping you decide who should win a couple of marque match ups we have this season. We could break down who has the best quarterback, or defense, or special teams, or we could just figure out the victor from who has the best looking women!

Today we start with a week "breaking down" the Arizona State/Georgia game. It won't be just the temperature in the desert that will be hot on September 20th. You make the call. Which school has the best looking women? 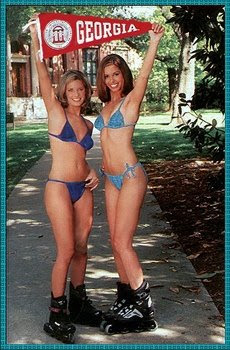 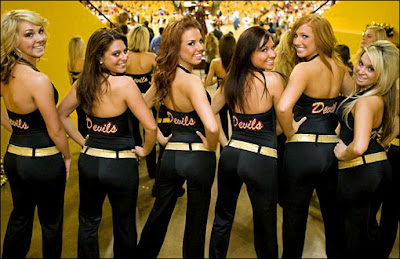 Stay tuned all week for more pictures to help you make your decision!
Posted by College Football Guys at 9:25 AM No comments:

Another Friday, Another Office Mess

Don't you wish it was this simple sometimes...

Posted by College Football Guys at 12:02 AM No comments:

In the wake of Kenny Stabler's arrest for a DUI the University of Alabama has made some changes to its schedule poster in order to raise alcohol awareness on campus and with alumni. Let's see what you think. 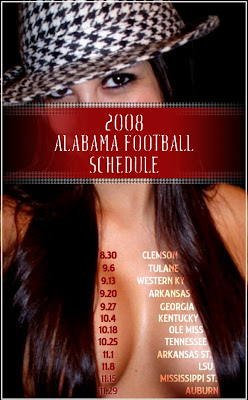 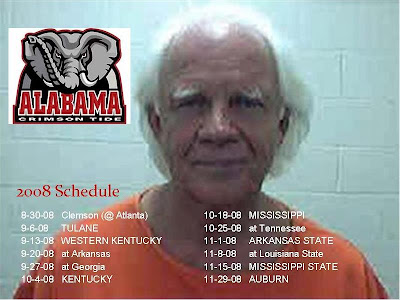 Posted by College Football Guys at 1:39 AM No comments:

This weekend Alabama legend Kenny Stabler was arrested for his THIRD DUI charge! I think that the Alabama troopers were just testing out the newest product to hit the University of Alabama Bookstore. Watch out, it might be at a bookstore near you so you can help your own legend with his drinking problem, er Warren Moon? 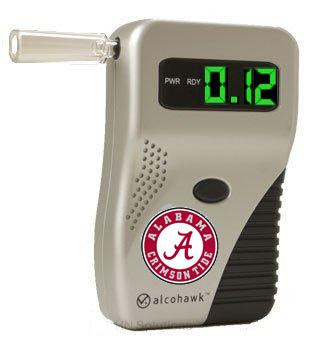 Posted by College Football Guys at 10:11 PM No comments:

June Podcast is UP!

The College Football Guys are back for a June edition. Join them as they debate whether or not programs should add another conference game. Which coaches are in the hot seat this season? Is November too early to sign recruits? Are you excited about the college preview magazines hitting the stands? Also the best segment The College Football Guys have EVER done - "Is Your Coach Overpaid?"

Great stuff from one of our correspondents on The College Football Guys.

Want to check out more of his stuff? http://collegefootballtourguide.com/the_college_football_tour_guide.html
Posted by College Football Guys at 9:44 AM No comments:

Something funny can indeed come out of a spelling bee...

Posted by College Football Guys at 1:58 PM No comments: