What We Learned Week Fourteen

While the College Football Guys may not have figured out if the BCS got the Big 12 South tie breaker right (find out what we think in this week's podcast tonight!). We still learned an awful lot this weekend in college football. Below is just a sample.

It is no wonder the Big 12 conference is getting so much love this year. Watching the end of a Big 12 game is like watching the end of a March Madness game. Both Kansas/Missouri and Nebraska/Colorado games were decided in the final minute. Kansas with a play from Todd Reesing that would make Flutie proud and Nebraska with a 57 yard field goal! One can only hope the Dr. Pepper Big 12 Championship Game brings as much excitement.

How fast has the luster faded from the MIGHTY SEC? With a victory over rival FSU, Florida avoided an Almost College football Conference weekend sweep of the SEC. South Carolina, Georgia and the former darlings of Vanderbilt each lost their regular season finales. Their defeats brought the SEC's record to 6-10 vs. BCS programs this year and 4-6 vs. the ACC. Before Florida's victory on Saturday night the last BCS program the SEC defeated was at Arizona State on September 20th! Since that game the SEC has lost to Texas, Wake (twice), West Virginia, Duke, Georgia Tech, Clemson as well as non-BCS "powerhouse" Wyoming.

Notre Dame found out Saturday night who the true five star athletes are. USC's dominance of the Irish was not defined enough in the 38-3 score. The true stat is the 91 yards of total offense the Trojans held ND to. The Irish could muster only 9 yards in the first half and achieved their first, first down on the last play of the third quarter. NO ONE can argue that recruiting web sites and magazines have been inflating Notre Dame classes for years in an attempt to sell subscriptions and memberships. There isn't a single player on ND's roster that would start for USC.

The "Mad Hatter," Les Miles at LSU, was out "Hatted" this weekend by Arkansas. Razorback QB Casey Dicks threw a 24 yard TD pass with 22 seconds remaining to win the game for the Hogs. It is safe to say that the luck, er "great calls," of 2007 just weren't there for the Tigers in 2008.

Who says that Houston Nutt is the only "Right Reverend" in the SEC? Georgia coach Mark Richt sure looked like he was doing plenty of preaching on Saturday when he made his teamtake a knee and gather 'round after the third quarter. We all know the only reason teams go into the locker room at halftime is so the band can use the field.

Rick Neuheisel will start winning at UCLA when he finds a QB that throws more touchdowns to players in powder blue and gold than the opposition. Arizona State returned three Kevin Craft interceptions for touchdowns on Friday night (Craft's 17th, 18th, and 19th INT for the year to 7 TD's). Add the 71 yard fumble return for a touchdown you have an NCAA record for four defensive scores in one game. Remove the mistakes? UCLA wins 9-6.

Several uniform issues that came up this weekend. Since when did it become popular for kickers to color coordinate their shoes with their uniforms? Just goes to show that flipping through Eastbay catalogs takes up a majority of a kicker's practice/film study time. We wonder if these kickers ever get jealous of their girlfriends' shoe collection. 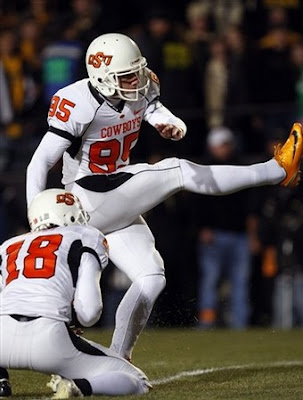 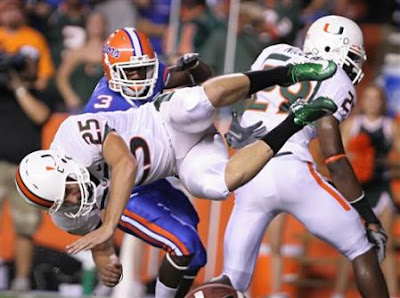 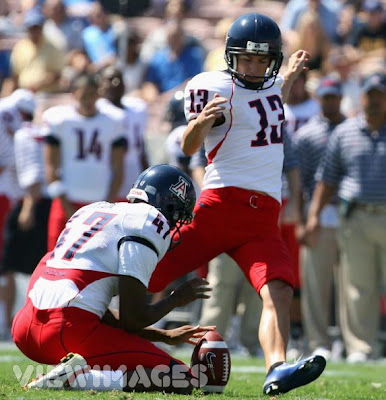 Seems that University of Missouri/Columbia researcher, David Brunsma findings were true in "that student uniforms have no direct effect on substance use, behavioral problems, or attendance." While he was talking about uniforms in the classroom of K-12 students he could have easily done his research on the results of college football programs wearing alternative uniforms. Especially ones that are piss yellow. 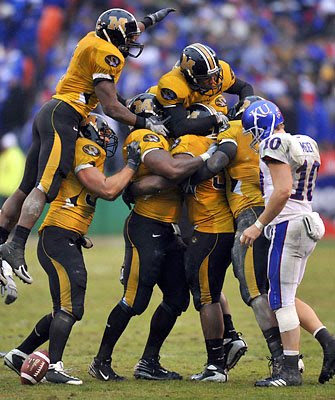 Posted by College Football Guys at 12:09 AM