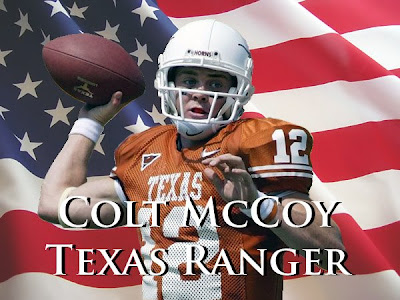 Since we have learned that Tim Tebow wears Colt McCoy Pajamas to bed, it does indeed appear that the torch of "awesomeness" has been passed. Here are some facts we found out about Colt McCoy and we don't believe any of these are Chuck Norris rip offs. If you think of any we might have missed, please let us know.

When Colt McCoy was born the Hatfield's surrendered.

Everything is bigger in Colt McCoy!

Colt McCoy dug the Red River with his bare hands to keep the riffraff out of the "Republic."

If Colt McCoy had been in San Antonio in 1836 there would be no Alamo.

Colt McCoy has not only solved every puzzle on the caps of Lone Star beer, but he has also created the last 114 riddles.

Chuck Norris and Mr. T’s fists collided once in the mid 80's, resulting in the birth of Colt McCoy.

From here on out the month of October will known in the Gregorian calendar as Coltober. The Eras shall be named the same, BC (Before Colt) and AD (Anno Domini - The year of our Colt), however they will now be adjusted to reflect the year of Colt's birth. Today's date: Coltober 29, 22 AD.

On the second weekend of Coltober, from here on out, the Oklahoma Sooners will walk from Norman, Oklahoma to Hobbs, New Mexico, the birthplace of our Colt, and then sprint to Dallas for the Red River Shootout. Any Sooner starter who cannot cover the distance in the same time it takes Colt himself to cover it (one hour, 12 minutes, 12 seconds) will be benched.

The draft from Colt's passing arm has been the cause of two of every three trailer destroying tornadoes that have torn through Norman. With his other arm he writes novels and signs treaties.

Colt McCoy convinced the Aggies that the thumbs up sign means Gig em'.

It was Colt McCoy's decision to declare Tim Tebow "the Chosen One."

At Whataburger the sandwiches are now referred to as the Coltburger and the Bradfordchicken.

Colt McCoy wasn't named after the gun, the Colt .45 was modeled after his arm.

In order to make things fair and exhibit good sportsmanship, Colt McCoy gives the Texas playbook to Texas A&M every year before the game between the two schools. He also teaches a free reading class to the A&M coaches so that they understand it. Unfortunately for A&M, this olive branch of humanitarianism doesn't always work.

Colt McCoy created Lubbock to place the prisoners of the "Republic of Texas." He left one pirate crazed coach and another who loves chair throwing to run the asylum.

Fiesta Bowl is Spanish for Colt McCoy which is why the Oklahoma Sooners are destined to lose every time they play in University of Phoenix Stadium.

Colt McCoy is the reason a bridge in Alaska goes to nowhere.

Colt tried out for the Olympic track & field team, but was disqualified because he threw the shot-put ball out of the stadium. Not having a tape measure long enough to measure his throw he could not qualify. Upset, he then took a second shot-put ball and through an out route to himself spiking the ball on the judge's foot. He then crumbled pieces of the earth in his hands and made his own gold medal that read "There Can Only Be One."

Indeed there can be only one Colt McCoy.

Know any other interesting facts about Colt McCoy? Comment below, or email us at email@thecollegefootballguys.com and we will post them later this week!
Posted by College Football Guys at 12:11 AM