What We Learned Week Eleven

We here at the College Football Guys learned many things this weekend in college football. Chief among them was the odds of seeing ANOTHER Big Ten team in the BCS Championship game dropped to almost zero! The nation, including FOX executives, BCS Sponsors/Advertisers, and anyone who enjoys watching a competitive football game, rejoiced!!

This week we learned that Joe Pa can't figure out the BCS. We think he solved the puzzle on Saturday. It's real simple Joe, JUST WIN!

After John Parker Wilson scored Alabama's first touchdown Saturday, in "Death Valley," against LSU. He earned a "celebration penalty" for making the "Call me" motion with his hand. It appears that LSU idiots, er fans, once again found the cell phone number of an opposing SEC player, posted it on the Internet, and called repeatedly. That made us wonder what Tiger fans had to say to JPW, that was so important. The following are the ten most creative messages left by genius Tiger fans.

Speaking of smart people from Louisiana, did anyone else find it interesting that Brett Helms (Center for LSU), was CBS' Scholar of the Game with a whopping 3.0 GPA? Seriously? There was no other player on either the Alabama or LSU sidelines with a higher GPA?

We still haven't learned why the SEC hates USC so much. This year the Trojans show all the classic signs of an SEC team - great defense. Minus the "Fluke in Corvallis," USC has allowed opposing offenses to score ONLY 33 points! The Trojan defense ranks 1st in the nation in Passing Defense, Total Defense and Scoring Defense, allowing less than a touchdown a game (6.67)! If that doesn't scream SEC football, we will never know what does.

We learned last week that beating Michigan, in "The Big House," was no longer enough to keep Toledo Tom's job. Now we wonder if beating Tennessee, in Neyland Stadium, is going to be enough to save Wyoming Coach Joe Glenn's job? Maybe his Cowboys' performance is just expected these days in Laramie, as Coach Glenn is 3-1 verse the mighty SEC in his tenure at Wyoming.

Will someone please inform Mountaineer fans that the game of football is 60 minutes long! With Cincinnati leading 20-7 and less than 4 minutes remaining in the game, WVU turned the ball over on downs inside the Cincinnati 10 yard line. Mountaineer fans hit the exits. They didn't get far. When the Mountaineers scored 13 points in the final 1:11 of the game fans began pouring back into the stands for overtime. Remember WVU fans, "It ain't over until, the fat lady sings!"

We think Wake Forest's gold uni's should have stayed back in 1956, but we will let you decide. 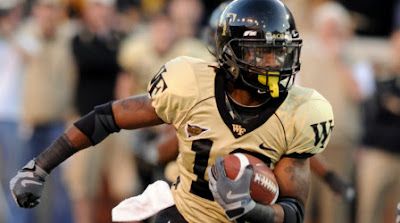 Posted by College Football Guys at 12:12 AM