The Big Ten and Beer 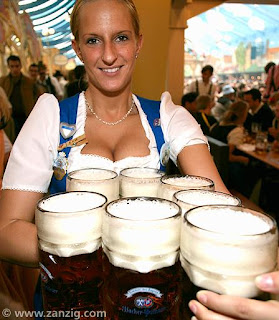 What do all these things have in common? They are the things that come to mind when we think of the Midwest. Oh and one more thing...cold winters and lots of beer.

The no-nonsense, smash mouth mentality of the blue color Midwest (or west if you ask the "Champions of the West") is reflected in its football and the way one wets his whistle. Without further a due here is a helping hand on recognizing the correlation between Big Ten teams and beverage they love so much, beer.

Ohio State - Bud Light. Mass produced, standard bearer which all compare themselves too. Not for the mature pallet. Those outside of region think that the product is watered down.

Michigan - Miller Lite. Claims to be better tasting with less calories and more sophistication (its "L-I-T-E" beer) than its rival, yet still gets beaten up by the standard bearer.

Wisconsin - Heileman's Old Style. An unassuming brew that just wants to run the ball, have a quick game and get back to State Street to party some more.

Michigan State - Coors Light. Dreams of being Michigan and Ohio State. No matter how much money they throw at it, or how many leagues they are the official sponsor of, they still can't get there.

Penn State - Rolling Rock. Hugely popular on the east coast. No one really knows why, nor does anyone outside the Poconos understand the significance of "33" or a "nittany." Pale in color and prefers plain uni's and large fraternity parties.

Iowa - Natural Light. Thinks its as good as the "big boys." This thinking is evident in the way it pays its head coach. Good cheap beer, and with the right keg cap can be pawned off as Bud Light.

Northwestern - Elsinore Beer. One program might want to give their "cat" a beer or two. May produce some victories... Funny movie, funny program. Neither care about football.

Illinois - Miller High Life. The Champaign of Beers. Alright that was a horrible pun, but this is the program that brought the Champagne of QB's into the NFL. Where is Jeff George now? I hear the Raiders still have a need.

Indiana - Guinness. A popular dry stout that gets you through the cold, dark, dirty, basketball season. Oh this is a football article? Who cares! Definitely no one in Bloomington.

Minnesota - An Empty Beer Mug Full of Tears. Why did Lou Holtz leave us! Boho..wah! MOMMY! MAKE HIM COME BACK!!

Purdue - Cask Ale. Much like a Boilermaker any one born after 1900 has NO idea what the heck you are talking about! A brew that requires a trained craftsman as well as much thought and engineering. Making a small comeback to the national scene.