The SEC as Liquor 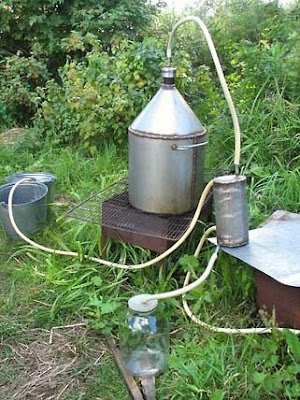 The south has provided all this and more to the American public. However the most important is the south's love of Spirits.

NASCAR, an entire sports industry, was built around a southern moonshiner's ability to outrun the authorities. It is the efforts of these brave men that saved America the liquid we all enjoy. Liquor is important stuff to these folks. Therefore it makes perfect sense that we compare their teams to the hooch we love so much.

Tennessee - Wild Turkey. Just as the clothes worn to the game, both can be used on your next hunting trip. No need to repack that 4X4. Just whistle for Smokey the hound, and go.

Vanderbilt - Jack Daniels Single Barrel. Not a bourbon, not an Admiral, not Ivy League, and definitely not Woodford's Reserve, but acts like it is.

Kentucky - Maker's Mark. Good solid bourbon that is content to be second best on its own campus. Enjoys a more laid back approach to life.

South Carolina - Old Crow. Mixed with sweetener makes a poor man's mint julep. Straight up it is too hard and abrasive(like a drink from a fire hydrant). The added flavor makes it more soft and subtle like the football team. Enjoys riding the coattails of the once successful.

LSU - Everclear aka Ethanol. No matter how popular and trendy they have become in recent years, when you break it all down it still just moonshine. James Carville is their biggest fan. Makes "drinking the Kool-Aid" that much easier.

Alabama - Patron. New spin on an old classic. Drinking it will make you feel like Superman and repress bad memories of the recent past. At the bottom of it all is still a big ol' worm.

Auburn - Jose Quervo Tradicional. Another case of mistaken identity. Inferior complex to 'Bama Nation. Popular in its own region, but never going to be as hip and recognizable as Patron no matter how many times in a row they beat 'em.

Florida - Grey Goose. Not the old Russian standard. This program and liquid is young, hip, good looking, and successful. "A liquor as pure and clean as the heart of Tim Tebow!"

Georgia - Smirnoff. Traditional program that is trying hard to be as young and hip as their rival. Mark Richt and Red Bull have given them wings.

Arkansas - Moonshine. Drinking it will make you crazy enough to drive your head coach right out of town. May also induce involuntary seizures that make you perform a hideous noise affectionately known as "The Hog Call."

Ol' Miss - Absolut CITRON. When paired with cranberry juice makes a fancy and pretty Cosmo for the fancy and pretty women in "The Grove." Take a taste of it on the field and you will experience how horrible it really is. Coach Nutt has no McFadden in the Oxford stable to make it taste any better.

Mississippi State - Malt Liquor. Believe they are the real thing. Drinking too much makes everything sound better with cow bells. Bottom of the barrel until late in the night or season then it’s palatable. "We need more COW BELL!"


Need to see the whole skit? Here you go.
Posted by College Football Guys at 12:26 AM